Why is DNA Stable than RNA ? 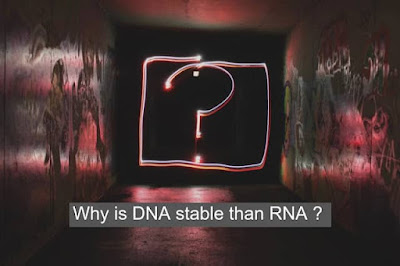 We know what DNA and RNA means but what we don’t know is why is this DNA more stable than RNA ? This is a very simple doubt and most of the students don’t understand is that the answer is in the basic understanding of DNA and RNA. If you don’t know what is DNA and RNA no problem you keep reading further.

Why is DNA stable than RNA ?

DNA also lacks the 2’OH group which also helps in making it more stable because as DNA is less reactive than RNA. So basically RNA has extra 2’OH groups that makes it unstable.

Both DNA and RNA can mutate (to change characteristics because of change in the genes are made permanently), but RNA can mutate at a faster rate because it is unstable in nature.

DNA stands for deoxyribonucleic acid. It is a self-replicating material present in a maximum number of living organisms. It is present in the chromosomes in the center of the cells. It is evolved from RNA. DNA is stable than RNA.
DNA stores genetic information. It encodes information to form synthesized strands. It also plays a role in the alteration of the sequence of a nucleotide of the genes.