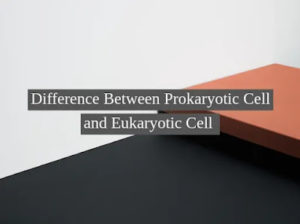 We sometimes don’t remember small difference between things and if it is something related to Biology then everything is jumbled in my mind, but you don’t need to worry about it. In this article, I’ll be stating few differences between prokaryotic cell and eukaryotic cell so it’s easy for you too.

What is Prokaryotic Cell ?

Prokaryotic cells are small, simple and the most primitive type of cells. These were the first to come into existence 3.5 billion years ago. The size of these cells ranges from 100nm to 500mm. They are known for your their rapid rate of multiplication which is more than eukaryotic cells.
Examples of prokaryotic cells are – Blue-Green Algae (BGA), Mycoplasma, Rickettsiae, Spirochaetes, etc.. There two ways by which these cells can be classified – On the basis of size and Gram stain. If the cells pick up gram stain that means they are gram positive and the rest are gram negative.
Related article: Prokaryotic Cell and its Ultrastructure
There are four forms which are as follows:

What is Eukaryotic Cell ?

The eukaryotic cell is larger and ten times more greater in dimension than the prokaryotic cell. These are true cells which occurs in plants (from Algae to Angiosperms) to animals (from Protozoa to Mammalia). It has an organised nucleus unlike prokaryotic cell. They show presence of cell organelles and are covered with several layers of membrane.
These cells are different in shape, size and physiology but there are certain things which are common in them such as – plasma membrane, cytoplasm and its organelles like mitochondria, endoplasmic reticulum, ribosomes, golgi apparatus, etc. and a true nucleus.
The nucleus contains – DNA, RNA, nucleoproteins and nucelolus which is separated from the cytoplasm by a thin, perforated nuclear membrane. Since these cells are present in both plants and animals they still are not the same. The animal cell lacks rigid cell wall hence they are irregular in shape.