Criteria for classification of animals There are numerous creatures in the nature and each one has a different name based on their species or also known as phylum. So, the question is how do they put each of these animals into the phylum ? Well, it is done on the basis of criteria. In this article we are going to be talking about the criteria for classification of animals.

Criteria for classification of animals:

Classification of animals is based on many different types and following are the criteria by which classification is carried out:

Animals show variety in different shape, size, etc.. This is their body plan. Body plan is further divided into three basic plans which are as follows:

In this type the body is made up of cells which are in the form of clusters and are not organised as tissue or organ. Such a type of body plan is seen in simple animals, eg, Sponges. There are three different cells and individual cells have a specific function, but there is no guarantee if these cells will carry out their function until they are alive.
They lack nerve cells, hence there is no nervous coordination in the body. Phylum Porifera belongs to this type of body plan.

In this type the body of the organism as only one opening and a single central cavity. That one opening acts as a mouth as well as an anus. This type is shown by little complex animals, eg, Hydra. They show incomplete digestive system.

The cells are organised in the form of tissues and organs, hence it can be said that functions are being carried out by this organism. Phylum Cnidaria belongs to this type of body plan.

This type plan is in seen in all advanced and complex type of animal groups. The digested system is complete type having 2 openings, one as the mouth for ingesting the food and the other anus for egestion. Phylum Annelida belongs to this type of body plan. Symmetry means equal size, shape and number of parts on either side of the body if an imaginary line is drawn in the centre dividing it into two halves. Animals can show three types – Asymmetrical, Radially Symmetrical and Bilaterally Symmetrical.

The animals which cannot be divided into two halves even if tried to through any plane. Example, some sponges which grow in different shapes by branching and snail. In radial symmetry, the animal can be divided into more than two symmetrical parts in number of planes. These cuts pass through the centre and appear like radii. Eg, Starfish, Hydra, etc.. Animals that show radial symmetry are called Radiata. Animals which can be divided into two halves namely right and left if cut through a straight line in the middle. The animals have an anterior (front) end and a posterior (back) and also a ventral (lower) side and a lateral (upper) side. Animals showing bilateral symmetry are known as Bilateria. Eg, Fish, Frog, etc.. 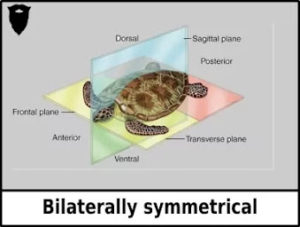 All organisms are evolved when zygote divides and further forms balls of mass which are known as the cells. The germ are the covering of the cell which later for layers like ectoderm, mesoderm and endoderm. Germ layers are also called as blastoderms.
These are formed during the embryonic development and slowly they develop into various parts of the animals. There are 2 types of organisations – Diploblastic and Triploblastic.

Animals that show only 2 layers of germ layers which are ectoderm (outer layer) and endoderm (inner layer) and shows no presence of mesoderm (middle layer) are called dipoblastic. The ectoderm and endoderm layers are separated by a non-living substance called mesogloea. Organisms in the phylum Cnidaria belong to this category.

Animals that show all the three germ layers or blastoderms are called triploblastic. From Phylum Platyhelminthes to Phylum Chordata belong to this category.

The body cavity is termed as the true body cavity which is formed by splitting of mesoderm layer. So it can be said that the mesoderm layer covers the cavity from all sides. This split is formed during embryonic development. It is also known as Coelom.
Depending upon the type of body cavity, three types of animals are seen – Acoelomates, Pseudocoelomates and Coelomates.

There animals do not posses a coelom. Instead, the cavity is filled with special type of connective tissue. Members from the phylum Platyhelminthes belong to this type of category.

These animals have an incomplete type of coelom, i.e. there is partial body cavity and the rest is filled by mesodermal cells. Members of phylum Aschelminthes belong to this type of category.

These types of animals have true coelom i.e, there is a spacious body cavity between the body wall and the digestive tract which is formed by splitting of mesoderm. Mesoderm in the embryo provides a cellular lining to the coelom called coelomic epithelium in invertebrates and peritoneum in vertebrates.
The body cavity is filled with coelomic fluid, but in some cases this fluid is absent and blood is filled in the cavity such animals are called haemocoel. Members from phylum Annelids onwards belong to this category.