How to join Merchant Navy in India 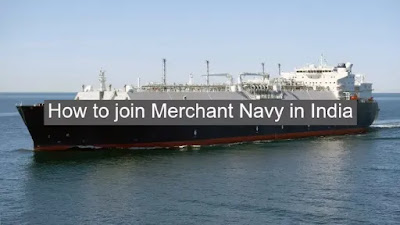 Many people love to travel, but have you ever thought about getting paid to travel around the word? Well this dream can come true in Merchant Navy and if you are someone who wants to pursue a career in merchant navy then you are at the right place because this is an in depth article on how to join merchant navy in India.

Many people gets confused between Navy and Merchant Navy. Merchant navy is for commercial purpose whereas Navy is related to protection of country. Merchant navy is one of the most rewarding career options in India and therefore many people want  to pursue it as a career but there is one problem in it.

What is Merchant Navy ?

Merchant navy is the foundation of worldwide trade, its play a huge and important role in import and export of a country which directly benefits in the growth of country.

Import and export is such an crucial part of countries economy making it one of the most rewarding career in India. Job in merchant navy includes many perks such as travel, no tax income from government and many more which are not available in other career fields.

Merchant ships are huge and therefore its huge amount of workers and man power to deliver goods from one country to the other and without it, import export of a country will crash effecting the overall growth and development in the country.

This merchant ships carry small things of everyday use including salt, cereal, sugar, to things used in large scale industries like iron and steel.

This large variety of import and export makes it a promising career with job security and high pay salary making it an ideal career choice for most of people.

Before going furthrr about how to get into merchant navy, there are some minor details such as average salary, various job profiles in this career about which you need to know.

How to join Merchant Navy in India ?

Now you know most of details about career in merchant navy and if you want to pursue it as a career, no matter if you are in class 10th or 12th, you will have to prepare for it from start. You should know the career path, courses, eligibility, colleges and other details to join merchant navy in India.

Merchant navy is a global industry and provides best career opportunities on different types of ships as well as on land. If you are looking forward to work in merchant navy then unlike any other field you will need specialized training and knowledge as well as both physical and mental health because in such job profiles you will be working under high work pressure and responsibilities.

All the job profiles in merchant navy can be categorised under these 4 main departments:

This was just a brief introduction of all 4 main categories, we will discuss each one of them in detail later in this article.

Salary in Merchant Navy varies from range of 12K Rs per month to 8 lacs Rs per month though salary structure differs from company to company, rank and department you are in.

*Salary can vary depending upon situation, rank and company.

There are so many courses through which you can get into merchant navy and all these courses can take you to different department in merchant navy. So here is the list of all courses you can go for after class 10 and 12th.

After completing class 10th, you will be eligible to apply for following merchant navy courses:

Here are the list of courses available after class 12 science with PCM:

Now all these courses are different and each of them will take you to different department in merchant navy which we have discussed before in this article.

All these eligibility criteria to join merchant navy are:

All the details regarding physical fitness and fitness certificate can be found here on Minsitry of shipping official website.

After completing class 12th with 60% in PCM, students can appear for Indian Maritime University Common Entrance Test (IMU CET) or All India Merchant Navy Examination to get into merchant navy courses.

Apart  from these two courses, one can also get into Marine engineering with JEE, TIMSAT and MERI Entrance Exam.

As mentioned earlier in this article, there are 4 main departments in Merchant Navy. All these 4 departments work with each other to run one whole ship and therefore each one of these are crucial yet very different.

So lets learn about all these four department and step by step guide about how you can get into this.

Merchant ships carry passenger or cargo from one place to another and navigating a ship requires lot of skills. Ships are huge and because they are made up of metal, it needs maintenance time to time because its travel in salt water.

All this work is carried out by a navigation or deck officer and they play an important role.

You can join deck department as cadet in the start by completing BSc in Nautical Science.

To get in BSc in Nautical science you will need to complete class 12th with PCM 60% and after that have to appear for IMU CET entrance exam.

Admission Process: To become a cadet, you have to appear for IMU CET after your class 12th, after appearing for IMU CET you will be eligible to pursue BSc in Nautical Science in different colleges which are affiliated with IMU (Indian Maritime University). In this entrance exam you will also have to give interview as well as medical test.

You can also get into different government colleges offering BSc in Nautical science through JEE Exam.

Now there are different ranks in deck department as well and after you complete your graduation in BSc. Nautical Science, before joining as a cadet you will have to undergo 1 year of pre-sea training before joining actual ship.

After joining as third officer, you can increase your rank based on your experience.

Ships require huge amount of machinery, engine and generator to generate electricity to run all these machinery. All these jobs requires day to day maintenance and running which is carried out by the engine department of the ship.

You can join engine department of ship by completing your bachelors in one of the following engineering courses:
Admission Process: You will have to appear for IMU CET which is conducted by Indian Maritime university, after clearing IMU CET  you will be eligible to any IMU affiliated course with B.Tech in marine engineering. To appear for IMU CET you will have to complete class 12th with 60% in PCM or you can also get admission into any normal engineering college in one of the above courses after giving JEE exam.

After completing your 1 year pre-sea training you will be placed on, “on board” ship training of 6 month after which you will be eligible to appear for competency examination as marine engineer which is conducted by Directorate General of Shipping of Government of India.

After clearing this competency examination, you can join ship as a 4th engineer and with time and experience you can increase your rank.

Step 1: Complete class 12th with 60% in PCM.
Step 2: Apply for IMU CET or JEE entrance exam.
Step 3: Get admission B.Tech in Marine engineering.
Step 4: Complete 1 year of pre-sea training.
Step 5: Complete 6 month on ship training as engineer cadet.
Step 6: Apply for competency examination conducted by Directorate General of Shipping.
Step 7: Join as a 4th Engineer.
After joining as fourth engineer, you can increase your rank based on your experience.

As I said earlier, Merchant navy is among the most rewarding career option in India with additional perks that no other job or career offers and all these perks and advantages may convince you to believe that this is the ideal career choice for you but that’s not always the case.

This career is not suitable for everyone but how will you decide that whether this career is best for you or not?

Answer is easy, by checking the both advantages and disadvantages of the career. After knowing both the sides of the coin if you feel that you can be the perfect candidate for the job, then this career is for you but before that you should know all the aspects of this career which I will be covering in this section of the article where we will talk about pay scale, different job profiles and life in Merchant navy.

Everyone thinks that life in merchant is luxurious just because you get a chance to travel around the world and explore 3/4th of the planet and most importantly you are getting paid for it but its not as simple as it looks. This job does seem heavenly but there are some disadvantages as well and to understand these disadvantages you will have to look into the life of person who is in merchant navy.

Here I am linking an article where an officer shares his own personal experience on ship. This short experience of him can give you the idea about what is the life in merchant navy and risks you are involved in with all these perks.

Here is one vlog style video of a mariner in Engine and Deck department which will give you a idea of life in merchant navy:

In merchant navy when you are on board you are able to explore to world and oceans but just like any other profession there are downsides of it as well. You will have to be fit physically as well as mentally all times.

There is always a high risk of losing something precious in almost every profession. Knowing both the advantages and disadvantages of the career can help you to make better decision for your own self, whether you want to pursue career in this or not.

Here is the table stating both the advantages and disadvantages of merchant navy:

How can I apply for Merchant Navy?

Ans: You can apply for Merchant Navy courses such as BSc in Nautical Science or B.Tech in Marine Engineering after completing class 12th with 60% in PCM and 50% in Engish.

What is Salary in Merchant Navy?

Ans: Salary in Merchant Navy in India can vary anywhere from 12000 Rs – 8 Lacs Rs per month in India. A cadet gets around 15000 Rs per month in his on board ship training period but this varies from company to company.

What is starting salary in Merchant Navy?

Ans: A cadet in department and engine department gets anywhere around 15000 to 40000 Rs in India during his on board training periods. This starting salary varies from company to company, city to city and import-export.

Is Tattoo allowed in Merchant Navy?

Ans: Merchant navy has no restriction on tattoos and piercing but some international companies have there own rules and standard and does not employ a person with tattoo visible whilst in uniform.

Ans: Merchant navy is one of the best career option to opt for but only if you know both advantages and disadvantages of it which is covered in this article with life of a merchant officer.

31 thoughts on “How to join Merchant Navy in India”