8 Applications and Examples of Diffraction in Real Life 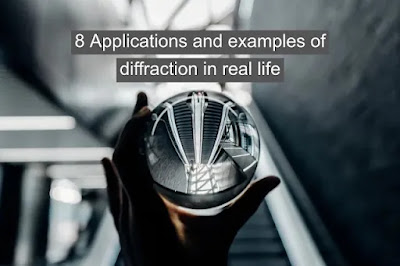 Well, we all love rainbows after rain, we all know that light plays a key role in the formation of a rainbow and there are many things about light which you may not know and one of those phenomena is diffraction. It’s a simple phenomena but still an important one.

You may have seen some of the real-life examples of diffraction in your life but due to lack of proper knowledge about them, you may have not be able to recognise them well.

Examples and application of diffraction in real life:

1. CD reflecting rainbow colours
2. Holograms
3. Sun appears red during sunset
4. From the shadow of an object
5. Bending of light at the corners of the door
6. Spectrometer
7. X-ray diffraction
8. To separate white light

To know how diffraction occurs in the examples mentioned above-read further.

Real-life examples and application of diffraction:

Before understanding how diffraction occurs in the real-life examples lets learn about diffraction first.

Lights behave like waves. If light waves encounter obstacles or a slit with a small gap, waves start propagating from that gap. That gap or diffracting aperture becomes the secondary source of propagating wave.

Gap in the obstacles behaves like a secondary source of the wave because light bends around a corner or obstacle and this phenomenon of a wave is called Diffraction. 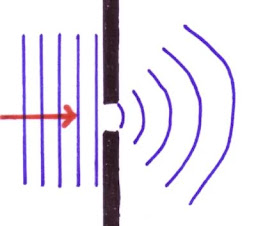 Phenomena of diffraction is described from the Huygens-Fresnel principle. According to this principle, every point on a wave behaves like a source.

Now you may have heard about interference and it’s kinda same like diffraction but wait don’t get confused between both of them.

This effect also occurs when light waves travel through a medium of different refractive index. All kind of waves such as water waves, gravitational waves and electromagnetic waves all waves in spectrum such as radio waves, x-ray, gamma rays etc. as well.

Now you know about diffraction and let’s know some of the real-life examples and application of diffraction.

Examples and applications of diffraction:

Many a time you may have seen diffraction in your life but the problem is we may not notice these little things which are created due to some of the most interesting phenomena of science and diffraction is one of them.

So almost all of you have seen a rainbow formation on rainy days. Well, rainbow is formed because water droplets in the atmosphere separate white light into different colours of the rainbow. Compact Disc (CD) also resembles the same kind of colours when viewed from different angles. 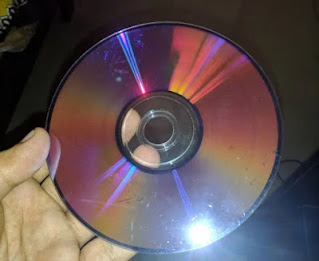 Recorded data on CD is stored in microscopic pits of different lengths which carries information in the CD. These pits are placed in a row of the same width and at equal distance. This forms a diffraction grating on the CD mirror surface.

P.s:- Microscopic pits means where data on a compact disc is stored in binary format (1 or 0) inside a CD.

So, what comes inside your mind when you hear the word ” hologram”, it’s sound cool to me and this phenomena is pretty cool. Hologram projection is also an example of diffraction and you may have seen one. So let’s understand the relation between diffraction and holograms.

So now you may be wondering, how diffraction is related to the projection of holograms ?

You all know whenever you are trying to click a photo with your smartphones, if you are in motion during photoshoot then the image will be blurred because the camera is not able to click steady photo when you are moving.

In this case, we are talking about light which travels at the speed of 299 792 458 m/s. So it nearly impossible to click a photo of light but wait, we all have seen holograms and as we have discussed earlier holograms are the steady 3-D photographs of light.

So here comes the phenomena of diffraction which is used to create holograms. You all know that when we throw a stone in steady water it creates a disturbance in the water and it will form some waves. Now imagine if you throw two stones, these will create two different waves on wave crossing each other’s path. This wave is called an interference wave. So what is the big deal about this interference wave?

Well, when these waves cross each other’s path they create a standing wave. This standing wave can stand still and therefore they can be photographed. 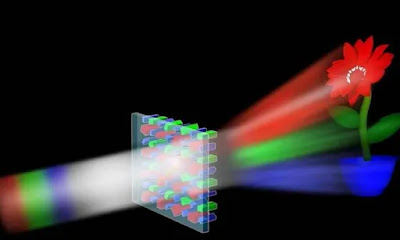 As light travels in the form of a wave we can use two different waves of light and create a standing wave which can be photographed which is what we called as a hologram.

It’s a fact that we all have seen sunset and sunrise but have you all ever thought of it? The reddish appearance of the sun during sunset or sunrise is due to diffraction.

Well, I guess none of you know about sunset’s reddish appearance is due to diffraction, even though you all have seen sunset and sunrise almost every day unless you are not lazy like me who wakes up in afternoon 🙂

Where is diffraction taking place in a sunset? Well, sun appears red because light gets diffracted due to a dust particle in the atmosphere.

4. From the shadow of an object:

Well here whichever object we are talking about is acting as an obstacle for lightwave and thus light waves bend at the edges of an object. This is the reason behind our object looks black.

Light from behind gets diffracted because an object is acting as an obstacle in the path of light waves.

5. Bending of light at the corners of the door:

When you turn off your room’s lights in your house and lights are on in another room. You definitely have noticed light coming in your darkroom but what if we close or slightly bend the room door? 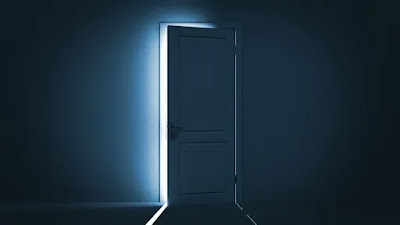 Well even after that some light can enter in your room because the door is not been able to fully cover you up, there is some gap in the door through which light can enter inside the room. This is also one of the daily life examples of diffraction.

The door is playing the role of an obstacle in the path of light wave here and light waves can enter a room through gaps in the door. These gaps are acting like secondary sources of light wave as described by Huygens’s principle.

So all waves propagate and have spectrum. Same goes for light waves as well and spectrometer is the instrument used in spectroscopy as the name suggest. This instrument helps in the analysis of light wave of the specific spectrum. With the study and observation from this, we can have a detailed analysis of material so this is also used to identification of different material.

P.s: Spectroscopy is used in astronomy to identify the element of which star is composed of.

So as we all know that X-ray is an electromagnetic wave and this wave has a very helpful application from taking X-rays of the human body to find some minor defects in bones to find the structure of a material.

X-ray diffraction is used to identify the structure of crystalline materials. This method is based on the principle of dual way/particle nature of X-ray.

The main primary objective of X-ray diffraction is to find identification and characteristic of a compound on the basis of their diffraction pattern.

We all have seen the formation of a rainbow after a rainy day, well it’s because white light from the sun gets separated due to water droplets which forms a rainbow of seven colours and this phenomena of separation of white light can be performed with the help of diffraction gradient as well.

P.s:- Separation of light can also be performed with the help of glass prism. 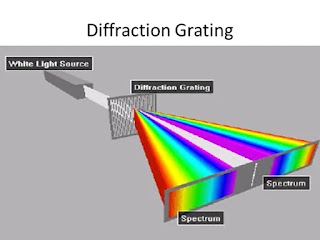 The diffracting gradient separates white lights into different colours when light passes through many fine slits of the grating. This is how the separation of white light is done with the help of diffraction.