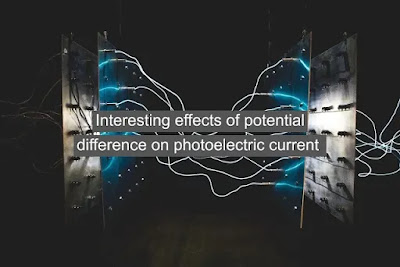 What is Photoelectric current?

What is the photoelectric effect ?

In the above image, you can see the setup of the experiment. Light from source ‘S’ travels through quartz crystal to photosensitive plate ‘C’ and when light hits the plate ‘C’ surface, the electron gets emitted due to the photoelectric effect, due to potential difference created by battery electrons get attracted towards collector ‘A’ and this electron gets collected to collector ‘A’.

P.S:- As you can see in the image above, electron emission and collection is carried in evacuated (vacuum) glass tube so that there is no involvement of the third party in the process.

So now it’s time to reveal the truth and understand what information and interesting facts we came to know from the taken observation.

So after some time, this increase in photoelectric current is constant and after that, there is no increase in current even if we increase positive potential.

2. After applying negative retarding potential on plate A and increasing negative potential gradually with respect to plate C we see a downfall in the amount of photoelectric current produced.

When the negative potential on plate A is increased, now it’s hard for even the most energetic electron to reach collector plate A and current stops flowing.

The point at which negative potential on the collector plate is so high that most energetic ion is also not able to reach plate A and currently does not flow in the circuit is called stopping potential.

So when an accelerating potential is increased on collecting plate A with respect to an emitter plate C, photoelectric current increases, but after some time it becomes saturated current and amount of current do not increase even after increasing positive potential.

When the polarity is reversed on collector plate A and emitter plate C, plate A now has negative potential and when this potential is increased gradually in negative direction after sometime current stops flowing and this point of potential at which current stops is called stopping potential.

P.S:- Above observation is taken when intensity and frequency of light were kept fixed and the potential difference was changed.

Interesting fact drove from observation when potential is changed for different intensity of light :

Q.1 What is Saturated Current ?

Q.2 What does observation graph show us ?

Q.3 Why electrons get emitted due to light in photoelectric effect ?

Electrons not always get emitted when light falls. It depends upon the frequency of light. If a suitable frequency of light is used which gives energy equivalent to work function or more then that only then an electron will leave the surface of the metal.

Q.4 What is work function ?

The work function is the minimum energy required by an electron to leave the surface of the metal.

Q.5 Why we are using evacuated glass tube in the experiment ?

Evacuated glass tube is used so that no third party object or phenomena can interfere with our experiment.

Q.6 What is the use of commutator in photoelectric effect experiment ?

Commutator is used to change the polarity of collector plate A and emitter plate C with respect to each other.