Why Egestion is not a Part of Excretion ? 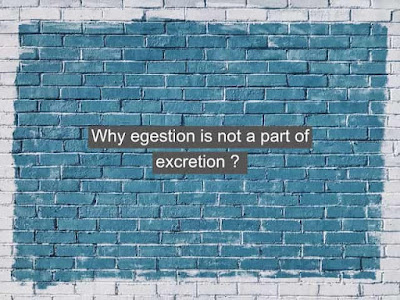 Egestion and excretion are both different words (If you want to know the difference between them click here), but sometimes we wonder that is egestion even a part of excretion if no or yes then why is it or is it not a part ? This is what we are going to be reading about.

Egestion takes place only in animals. The process where faeces are eliminated out of your body through anus is called egestion. It is simply the food which has been leftover after the process of digestion. Not only anus but it can also take place through mouth but only sometimes.

Excretion takes place both in plants and animals of the living organisms. It eliminates the metabolic wastes that the cells produce which needs to be removed in order for the cells to stay clean. It can be of any type sweat, urine, via nose (carbon dioxide), kidneys and lungs. Excretion is an important process because it maintains homeostasis, internal balance of an organism’s system and also regulates the temperature of multicellular organisms such as the vertebrates.

Is egestion a part of excretion ?

No, egestion is not a part of excretion.

Why egestion is not a part of excretion ?

Egestion is a removal of undigested food which cannot be digested further which is removed in the form of solid or sometimes semi solid and this is related with the digestive tract and then out through the anus. Whereas, in excretion there is elimation of metabolic waste such as urine, sweat, etc. and not the digested food. Hence, egestion is not a part of excretion.