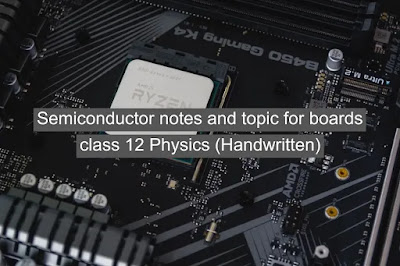 Materials are divided on the basis of their conductivity. If materials conduct electricity, its a metal and if it does not then conduct it’s an insulator, but there is a third category as well which lies between these two, which is known as semiconductor.

A semiconductor is a material that can behave like an insulator but shows conductivity depending upon the surroundings and situation. Due to this nature of semiconductor, we can even control the flow of electrons in a circuit with the help of them.
In this article, I am going to provide you with some basic details about semi-conductors as well as if you are a class 12 student then I am going to give you important topics from chapter 14 Semiconductor.

What is a semiconductor ?

Semiconductor classification on the basis of resistivity and conductivity:

How did we know about all these things that a particular material will conduct in same condition and in some it will not?

Well for that let’s divide solids on the basis of the relative value of electrical conductivity (σ) or resistivity (ρ) and classify them as:

b. Semiconductor: As I told you earlier, there resistivity and conductivity lies between metal and an insulator.

c. Insulator: They have high resistivity and low conductivity due to which they don’t conduct electricity.

For 1 marker and MCQ for class 12 boards, conceptual questions from these topics as well as a photodiode and p-n junction questions can be asked.

All these topics are provided in the notes given below, they are highly in-depth class 12 physics notes of Ray optics so refer to them, it’s more than enough for boards.

So do read these notes if you are a class 12th student and preparing for your board exam. These notes are easy to understand. To download them CLICK HERE.