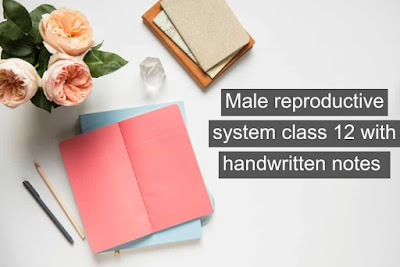 Some people might find it fun to read about human reproduction but some might cringe out (just like I used to in the beginning). Human reproduction is not about what you are probably thinking about instead we all should know this basic things about both other genders as an awareness about the diseases which can be linked to it and how it can be prevented, might talk about it in the end but first lets get to know the basic about a male reproductive system.

Keep reading this article because I have embedded my handwritten notes at the end of this article. 🙂

Constituents of the male reproductive system:

Talking about the external male reproductive system, it consists of the following parts:

The internal male reproductive system is also known as the accessory sex organs. It consist of the following parts: 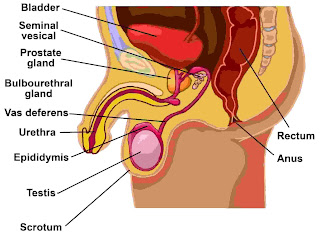 The male reproductive system is present in the pelvis region of the male body and it consists of the parts which are used for copulation i.e intercourse or coitus and for the production of gametes. The gametes i.e the male sperms are produced by meiotic division of the male germ cells.
The germ cells are given nutrition from the sertoli cells. The muscle dartos tunic divides into two compartments – left and right. The dartos tunic muscle is a smooth muscles of the lower abdominal wall and each compartments holds a testes, epididymis and a testicular end of a spermatic cord.
The male reproductive system consists of the following parts:

The human penis is a cylindrical, erectile and a pendulous organ which means it keeps on hanging downwards. The penis is the external component of the male reproductive system or also known as external genetalia.

It is made up of special types of tissues which are corpora cavernosa and a median corpus spongiosum which helps in the erection of the penis during copulation i.e. coitus.

The penis serves as both as a urinary duct and as a reproductive organ. It is an intromittent organ meaning it is the external organ which is used for delivering sperms during sex. The urethra is the one which carries both the sperms and the urine.

The penis is usually small but is erected on sexual arousal. There are many sinuses present in the erectile tissue which helps in the blood flow and hence resulting in erection.
As we know that the glans penis is made up of the tissue corpus spongiosum and urethra passes through the glans penis hence it is also known as spongial urethra.

The scrotum is a loose pouch-like sac of skin which is located outside the body for optimal temperature. The optimal temperature should be 2-3 degrees lesser than the body temperature. The scrotum hangs behind the penis which consist of testes in it. The optimal temperature is necessary to be maintained for production of sperms.
The scrotum acts as a protector for the testes and also maintains the optimal temperature for it. So, scrotum has the main purpose of protecting and also giving the testes a proper temperature to survive.
It is a dual-chambered suspended sac of skin meaning it has two chambers. Each chamber or compartment consist of spermatic cord, epididymis, collecting tubules and testes or testicles. The wall of the scrotum is made up of special muscles called cremaster muscle and the dartos fascia muscle which helps in contraction and relaxation of the testes in the scrotum.
This contraction and relaxation is necessary because it moves the testes nearer to the body and not away from it and because of this contraction and relaxation the temperature also is controlled in the testes or can be said that the temperature of the testes is maintained due to the scrotal movements.
The scrotum is an extension of the perinum which is located between the penis and the anus. It is homologous to labia majora and labia minora in females meaning it has the same relation, position or structure like labia majora or labia minora.
Have you ever wondered, after puberty why does your ball-sac get dark or black ? Well, the answer is simple, it is due to increase the secretion of the testosterone hormone in the male body during puberty which causes the ball-sac or scrotum to darken. Not just the darkening of the skin but also you will see pubic hair growing on it as well. This happens in humans and some other mammals.

Testes are oval in shape, soft and smooth organ. They are located outside the abdomen in the scrotum i.e. they are extra abdominal in position. They are about 4.5cm long, 2cm wide and 3cm thick. They are mesodermal in nature meaning that the testes is derived from many germ layers during development.
The testes are surrounded by three layers, which are as follows:
When the baby is in the womb the testes develop in the lumbar region of the abdominal cavity which lies just below the kidney. When the mother is seven months pregnant, the testes descend and are permanently shifted in their forever homes which is the scrotal sacs through a passage called inguinal canal.
In some cases the testes cannot descend into their respective scrotal sacs from the abdomen during the seventh month leads to a condition where the male is sterile and is called cryptorchidism.
The testes is connected to the wall of the scrotum by short fibromuscular band called the gubernaculum. They are suspended by the spermatic cord into the scrotal sacs.
There are 200-300 lobules present in each testis called the testicular lobules and each testicular lobule contains 1-4 convoluted loops called seminiferous tubules which are responsible for sperm production. Hence, making testes the location for sperm production. It is also the location for testosterone production.
A transverse section of testis will show difference stages of spermatogensis like spermatogonia, primary and secondary spermatocytes, spermatids and sperms. Almost all healthy male vertebrates have two testes.
A testis is homologous to ovary. Like the ovaries in the female produce eggs for the sperms to fertilise, the testis produces sperms.
The sertoli cells present in the testes are somatic cells which are necessary for the development and spermatogenesis. The sertoli cells also give nutrients to the sperms. The sperms produced in the testes are stored in the attached epididymis.

The epididymis are a pair of “C” shaped structure lying posterior to the border of each testis. It is 6 meters long and highly coiled ducts on both side of the testes. Testosterone the male sex hormone is produced in the epididymis.

The epididymis has three regions, which are as follows:

In the head of the epididymis i.e the vasa efferentia the sperms undergo physiological maturation, gain increased motility and the capacity to fertilise egg.

These are a pair of tubular structures which arises from cauda epididymis which is the lower duct of the epididymis. Each vas deferens is 40cm long and it enters the abdominal cavity through the inguinal canal.
It goes up in the form of spermatic cord, medially towards the posterior wall of the urinary bladder. It is joined by the duct arising from seminal vesicle which further forms ejaculatory duct. The main function of vas deferens is to transport mature sperms to the urethra for ejaculation.

The bulbourethral gland is also known as the Cowper’s gland which is a pea-sized structure located on both sides of the membranous urethra. These small pea-sized structure produce a viscous fluid which is slippery, clear and alkaline in nature which neutralizes the effect of previous urine that might still be present in the urethra and also provides lubricant to the vagina while sexual intercourse.
There is presence of fructose in the seminal fluid which is only produced in the bulbourethral gland and nowhere else in the body. In cases of rape, fructose gives a proof for forensic test present in the female genital tract.

The prostate gland is a walnut-sized structure that is located below the urinary bladder and in front of the rectum. There are 20-30 lobes which separately opens in the urethra.
It forms a white fluid which makes up 30% of the total volume of the semen and it gives additional fluid to the ejaculates which nourishes the sperms and neutralizes the acidity of the vaginal secretion during intercourse.
When the sperms hit the pH of 6.0 to 6.5, the sperms become motile and makes the process of fertilization easy.

These are small fibromuscular pouches posterior to the urinary bladder. It attaches to the vas deferens near the base of the urinary bladder and forms the ejaculatory duct. The seminal vesicles produce a viscous fluid containing fructose, fibrinogen and prostaglandins.
Fructose provides energy to the sperms for swimming all the way up to the eggs. Fibrinogen helps in coagulation of semen after ejaculation i.e. it makes the semen turn into semi-solid state from liquid state. Prostaglandins stimulates contractions in the female reproductive tracts and helps in the process of fertilization.
The viscous fluid made by the seminal vesicle makes about 60% of the total volume of the semen.

Seminiferous tubules are finely coiled tubules present in the membranous shell called tunica albuginea. Their inside lining is made up of germ cells and sertoli cells. Interstitial space is present outside the seminiferous tubules which contains of small blood vessels in it and also contains interstitial cells. Interstitial cells are also known as Leydig cells.
These are the site for production of sperms. They develop into sperm cells from puberty to old age. Developing sperms have a long journey to complete they first travel through the seminiferous tubules to the rete testis which is located in the mediastinum testis, then to the efferent ducts and finally the epididymis where the newly produced sperms mature.
Leydig cells present between the seminiferous tubules produce and secrete testosterone and other androgens which are important for development and puberty. These cells produce sperm by the process of spermatogenesis.

These are a pair of ducts which are about 2cm long and are formed by joining of vas deferens and a dust of seminal vesicle.

Both ejaculatory ducts open into the urethra in the region where the prostate gland is situated. They carry the seminal fluid and sperms to the urethra.

Semen is ejaculated during during sexual intercourse or sex or coitus. It is a whitish fluid which contains sperms and other mixtures secreted by prostrate gland, seminal vesicles and bulbourethral gland or also known as Cowper’s gland.
After a male penis ejaculates it gives about 3 to 4ml of semen which contains 300 million sperms, but you know the rules only one can fertilize the ovum. Large number of semen ejaculation makes sure that the process fertilization will definitely occur.

Why is the male reproductive system important ?

So, the male reproductive system is important to perform the following functions:

These are the following diseases which are related to the male reproductive system: