How to become a space scientist in ISRO 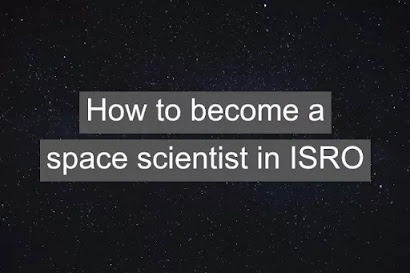 During childhood days, we all dreamt of becoming an astronaut and wanted to go to the moon because studying about space is interesting and nobody can deny that. Pursuing this childhood dream, many students want to become space scientists and join ISRO (Indian Space Research Organisation)

To become a space scientist in ISRO, one should pursue education in pure science or engineering sector. ISRO recruits candidates with either PhD degree in Astronomy, Physics, Mathematics or engineering in mechanical, electrical or computer science.

I was one of those people who wanted to pursue astronomy, so much that even after completing my class 12th I took a drop just to prepare for a particular exam.

Who is a Space scientist?

Space science is the field where scientists and researchers discover and research about space and the universe.

Space is so huge where our planet earth and solar system are only a really tiny portion of this space. You can think of it like, space is like Sahara desert where our solar system is only about the size of one particle of sand or maybe even smaller than that.

So therefore there are so many things in space which we still don’t know about and space scientists and researchers observe and study about space and try to learn different things about it.

It’s one of the interesting fields which you can select as your career where it’s not your work which drives you but it’s your curiosity.

This profession consists of two kinds: 1. Physicists and 2. Astronomers.

Physicists study the fundamental of sciences and theoretical areas whereas astronomers study and observe space, planets, stars galaxies, and things like that.

Both these are equally exciting and as you will pursue the career you will get a better understanding of what you want to pursue.

Why to become a space scientist in ISRO?

You are actually correct in that sense, but if you want to pursue this career, then you will have to give around 5-7 years of your life in pursuing this field and the rate with which ISRO is actually growing and carrying out its project.

The future of Indian space agencies like ISRO is bright and promising enough to pursue your career as a space scientist in ISRO and on top of that, there is some sense of patriotism as well if you are working in ISRO which is a proud moment in it’s own.

Still, this choice is subjective and depends on the individual for what organisation they want to work with but for most of them, the path of your education is almost the same.

How to become a scientist in ISRO ?

To get into ISRO, there are two different methods depending upon the education path you choose. Both of these paths are different and can get you into ISRO on two different positions respectively.

To get a clear idea on what you want to do, let’s discuss both the education paths after class 12th to get into ISRO as a scientist.

Now, to get into ISRO as a space scientist, you can opt for any of the two methods depending upon what work you want to do, but one thing which is same in both of them is that you have to complete your class 12th with PCM (Physics, Chemistry and Maths).

The course you opt for after 12th decides, the pathway you are selecting. So let’s discuss both of them:

In this method, you will be studying pure science, you have to pursue a Bachelor’s degree (BSc) in Physics, Maths or Chemistry (The subject you like) and after that go for Master’s (MSc) and Postgraduate (PhD) course in that particular subject.

To become an astronomer and pursue astronomy, opt for Bachelor’s in Physics (BSc in Physics) and after that Master’s and Postgraduate in Astronomy.

Now, ISRO is not much into space research like NASA and therefore there are no special exams for recruitment in ISRO if you pursue pure science to become an astronomer or researcher, but there are very few people who go for this field and therefore it’s highly reputed and with the speed by which ISRO is achieving different milestones around the world.

By the time you will complete your whole education they will also take interest into research and recruit more people in this work. This way you will have the first mover advantage.

One of the best ways to increase your chance to get into ISRO is to pursue your degree from IISc (Indian Institue of Science) from where ISRO directly recruits students in the research field.

You can get direct admission in IISc after class 12th by giving KVPY exam. You can give KVPY in 11th, 12th and even in the first year of your Bachelor’s degree (Bsc) in subjects of pure science like Chemistry, Maths, Physics or Biology.

If you want to read about KVPY we have a detailed article about preparation for KVPY SA, KVPY  SX and KVPY SB. If you clear this exam with top rank then you can get admission into IISc.

2. To go for engineering:

Now, this is a little bit tricky because generally, we imagine scientists who study physics and research in this field, but that’s not the case.

We all have heard of rocket science or rocket scientists, these are people who have speciality in rocket and they know how rocket works “The engineering behind rocket”

So, if you are interested in becoming an astronaut or rocket scientist then instead of pursuing pure science you should go for engineering.

For this, you will have to clear JEE mains and JEE advance and if you are able to score a good rank in JEE advance then you can get admission in IIST (Indian Institue of Space & Technology) which is directly controlled by ISRO.

In IIST you will have to pursue B.Tech in Aerospace Engineering and students who pass out after this can get directly recruited by ISRO or after scoring good rank in JEE advance, you can go for (IIT or NIT for engineering either in Mechanical/Electrical/CS) from where ISRO also recruits students but chances of recruitment is less compared to IIST.

There is one other options as well, if you are not able to score good in JEE mains or advance or not able to get seat in any of the above mentioned institutes then simply pursue your course in engineering in above mentioned branch from any college and apply for ICRB (ISRO Centralized Recruitment Board) exam.

Courses to go for after class 12th:

Now, many people get confused about the courses they can go for to pursue a career as a scientist in ISRO.

Here is the list of courses to become a scientist in ISRO:

16 thoughts on “How to become a space scientist in ISRO”