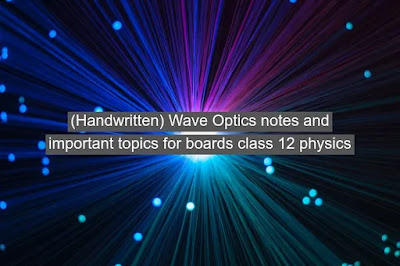 We have already taken a look at ray optics and if you are searching for some stuff regarding wave optics then I can already suppose you know a bit about optics and what is ray optics.

Hey! don’t get sad. In case if you don’t, we got you covered. Read this article and it will redirect you to another article on my site which talks about ray optics (sssh YOU will even find ray optics notes there!)

So with that, let’s head towards wave optics. Well optics means its related to light and all the stuff such as refraction, reflection and so on. Meaning of wave optics is also kinda similar but instead, we are here proposing another theory where light travels in the form of wave and different aspects and changes this “wave light” brings in the optics.

Well….. You know what? That was just a made-up name.

I guess now all of you got a little idea on what does wave optics mean but to understand it better we will need to look at wave theory of light in more detail.

So in this article, we will be discussing wave optics basics and will provide you with important derivation and topics from this chapter 10 for your boards if you are a class 12 science student and in the end, I have some in-depth handwritten my personal notes from this chapter for you guys.

Well as I said earlier about the wave theory of light, Huygen’s principle doesn’t say a different story.

Huygen’s principle says that light travels in the form of a longitudinal wave with a uniform velocity in a homogeneous medium. When this wave enters our eyes then it gives a sensation of light into our eyes due to which we can see things around us.

But how can a wave travel in a vacuum because basically there is no medium present there then how can it be possible?

So to overcome this problem, wave theory proposes that light travels in a hypothetical medium known as “Ether” which is present everywhere in universe even in space or vacuum.

Was this wave theory successful with reference to the real world ?

Well, this wave theory was able to prove certain experiments but as you know there is no theory that is perfect and therefore waves theory is also a case of failure in some experiments.

So let’s have a look at both the success and failure of wave theory with the practical world.

The success of wave theory:

(i) Wave theory was able to explain some phenomena such as interference, diffraction, reflection and refraction.

The failure of wave theory:

(i) Wave theory was not able to explain the effect of polarisation, Compton effect, photoelectric effect and light in transverse.

(ii) The energy of waves does not depend on its amplitude but depends on frequency.

For 1 marker and MCQ for class 12 boards, conceptual questions from these topics as well as wavefront and wave theory of light can be asked.

All these topics are provided in the notes given below, they are highly in-depth class 12 Physics notes of Wave Optics so refer to them, it’s more than enough for boards.

So do read these notes if you are a class 12th student and preparing for your board exam. These notes are easy to understand. To download them CLICK HERE.