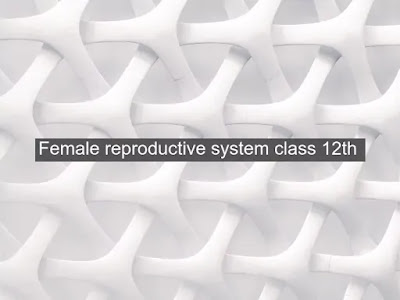 From boards point of view, Female Reproductive System is important, but it is not only important for your exams but also for you personal knowledge as well about another gender. In this article we are going to be talking about the female reproductive system in detail and the disorders linked to it.
Related article: Male reproductive system

The internal genitalia consists of Ovaries, Uterus, Fallopian Tubes and the Vagina.

The ovaries are the primary sex organs of the female reproductive system. They are 3cm long, 1.5cm wide and 1cm thick. They are almond shaped. The ovaries lie on the lower part of the abdomen which is also known as the pelvic cavity. The ovary produces and secretes female sexual hormones (estrogen and progestron) and an egg every month.
There is blood supply to the ovaries by numerous blood vessels and lymphatics which go in and out of the ovaries. These blood vessels and lymphatics are going into the ovaries with the help of suspensory ligaments and ovarian ligaments. Suspensory ligaments are the ligaments which connects the ovaries to the lateral pelvic wall and ovarian ligaments connects the ovaries to the uterus.
The ovary consists of an outer cortex containing follicles and corpora lutea and an inner medulla containing large blood vessels of the ovary. The cortex is covered by a dense connective tissue called the tunica albuginea which gives whitish colour to the ovaries.
Externally, the ovary is covered with germinal epithelium which encloses tunica albuginea. This germinal epithelium is formed of simple squamous or cuboidal epithelial cells.
As the ovary is an egg producing organ, these eggs or ova are in the ovarian follicles in many stages of maturation. These follicles are enclosed in the stroma of the cortex. The egg is released each month when the females starts her menstrual cycle.
Menstrual cycle:
Menstrual cycle is a characteristic of primates like humans, apes, etc.. It is also known as the female reproductive cycle or ovarian cycle which starts at the time of puberty or menarche. This cycle is on going until the childbearing periods which is of 32 years.
The cycle lasts upto 28 days which is marked from the 1st day of the flow. The blood flow lasts for 4 to 5 days. This process consists of a lot of changes in the ovaries and uterine wall which takes place simultaneously.

The uterus is like an inverted pear-shaped organ in the pelvic cavity between the rectum and urinary bladder. It is muscular, hollow, thick walled and a highly elastic median sac. It is also known as the womb. The uterus is 8cm long, 5cm wide and 2cm thick. 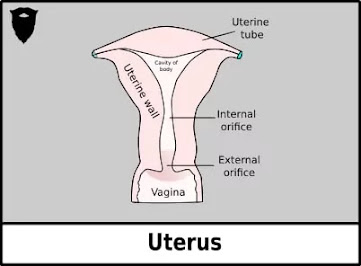 It is attached to pelvic cavity by double folds of peritoneum called mesometrium or broad ligament. Peritoneum is a serous membrane which forms a lining of the abdominal cavity. The uterine cavity is somewhat triangular. Blood is supplied to the uterus by iliac artery that is the uterine artery.
The uterus is divided into 3 parts:

There are 3 layers of the uterus – The external serous thin layer called the perimetrium or epimetrium which is derived from peritoneum, the middle thick smooth muscle layer called myometirum and inner glandular layer called endometrium. There are cyclic changes taking place in the endometrium during the time of menstruation.

Functions of the uterus:

The fallopian tubes are also known as oviducts or uterine ducts which are on either sides of the uterus having one ovary each. They are about 10-12 cms in length. There are 3 walls – Mucosa, Muscularis and Serosa. 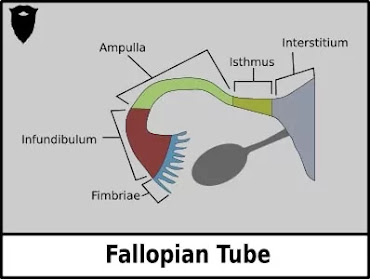 The innermost wall musoca is lined with ciliated epithelial cells and secretory cells. The secretory cells produces a liquid sheet which provides nutrition and protection. The external part is covered with thin double layers of muscles which helps to perform the movement (peristalsis) of the tubes.
The fallopain tube is divided into 4 parts – Infundibulum, ampulla, isthmus and uterine part (interstitium).
The functions of fallopian tubes are as follows:

At the end of the cervix, the vagina starts. It is a fibromuscular tubular which is 7.5 to 10cm in length and open in the vulva (External geniatlia). The vaginal opening is more larger than the urethral opening. The inside of vagina and the vulva is reddish-pink in colour indicating it to be healthy.
The wall of the vagina is made of mucosa, a muscular layer and an adventitia. The inner lining cells of the vagina stores glycogen. The vaginal bacteria ‘Lactobacili’ ferments this glycogen making the mucous acidic, due to the mucous being acidic it prevents infection by fungus.
The opening of the vagina on the outside is covered partially with a thin ring of tissues known as the hymen which may or may not be ruptured during intercourse. Apart from being ruptured during intercourse it can also rupture due to sports, exercise, etc..
Vagina is highly vascular with many blood vessels. During the time of intercourse the vagina is moist because it produces lubricant which is secreted by Bartholin’s gland which is situated near the vaginal opening and the cervix.
The functions of the vagina are as follows:

Labia majora are two thick folds of skin on the outer side forming a boundary of the vulva. It is composed of adipose tissue, sebaceous (oil) glands, sweat glands, skin, fibrous tissues, fat and hair.

Mons pubis is on the top of the labia majora separating it into two folds. It is formed of adipose tissue and is covered by pubic hair.

The clitoris is a finger-like, small and solid erectile organ which lies at the top of labia mainora. Clitoris has erectile tissues. It is highly sensitive which contains many nerves ending there. It is covered by clitorial hood.
The size and shape of clitoris is same as a pea. The place where labia minora meets with the clitoris is called the frenulum clitorids. It is formed of cavernous tissue.

The vestibule is the opening of maybe vagina, urethra and other ducts. It is in between labia minora. The vaginal opening is guarded partially with the hymen.

Greater vestibular glands or Bartholin’s gland are small and rounded bodies on each of the vaginal opening. It secretes a viscous lubricating fluid during copulation which opens outside the hymen into the vestibule.

The breast are round structure located on the pectoral muscles on the front wall of the thorax. It is composed of large amount of fatty (adipose) tissue, connective tissue and mammary (milk) glands. In children and men, they are in undeveloped condition whereas in females the breast begins to develop under the influence of hormones – estrogen and progestrone. 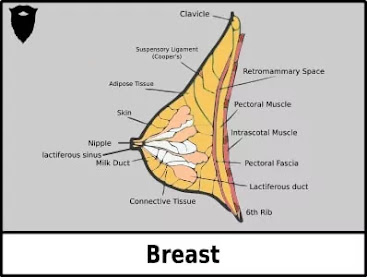 The breast has a nipple in the middle which is surrounded by pigmented circular area called as areola which can be deep pink to brown in colour. The nipple is erectile in nature. The mammary glands  are modified sweat glands which are divided into 15-25 lobes which are separated by fatty tissues.
Each lobe contains numerous lobules. Lobes collectively forms alveoli which drains in the lactiferous ducts. Each lobe represents one gland. The nipple has 15-25 opening of lactiferous ducts on it. As the lactiferous ducts comes to an end it enlarges and forms lactiferous sinus which stores milk.
Mammary glands start to develop at puberty and are supported by connective tissues and are covered by adipose tissues. After menopause, the mammary glands starts to decrease in size. Release of milk from breast is under the influence of oxytocin and prolactin which are controlled by the pituitary gland.

Functions of the female reproductive system: