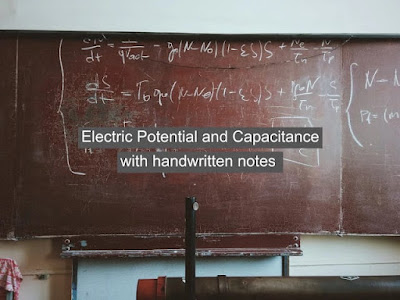 You guys maybe new to this word “Electric Potential” and if you are from class 12th then this word and this chapter has great importance in your boards. So in this article, I am going to clear doubt and basic concepts of this chapter Electric Potential and Capacitance. Handwritten notes are also provided at the end of this post so you can understand this post my reading and then the notes will help you in revising.

So electric potential (V) at a point in an electric field is the amount of work done in bringing a unit charge (without acceleration) from infinity to that point.

Well next word which you have been introduced here is “Capacitance”. Capacitance is the ability of an object to store an electric charge. I know these all terms may sound confusing but read the whole article to understand all the terms and clear your basics.

What is electric potential ?

So as I told you earlier electric potential of a point in an electric field is the amount of work done in bringing a unit charge (without acceleration) from infinity to that point.

Now in simpler terms due to this charge ‘Q’, there will be some potential at a point ‘P’ which lies inside electric field ‘E’

Symbol of electric potential is ‘V’ and the formula is:

Here ‘k’ is the Columbus constant if you want to know about coulombs law and coulombs constant that refers to this article this link will redirect you to that article.

Does that mean the above definition wrong?

Well, both of these statements are correct and this is where most of you would probably get confused. So to understand this understand one thing:

Electric potential is characteristic of a place in an electric field meaning that when you will put some charge at that particular spot the charge will have energy based on the potential of that point.

So whenever energy is applied and displacement is there or in simpler words when there is a change in distance and energy both are present then think that some work has been done.

This work is not what you do in your day to day life but in fact, it’s a physical quantity used in physics used to define the condition when energy is applied on something and due to this applied energy there is displacement.

The work done here will be the energy required to bring a unit charge ‘q’ inside an electric field ‘E’ created due to charge ‘Q’ and this is what electric potential is.

I hope now you understand how both of the statements are correct. If still, you have any query comment down below me will definitely solve your doubts.

So electric potential energy of charge ‘q’ at a point is the work done by external forces in bringing charge ‘q’ from infinity to that point present.

The unit generally means “one”. For example, 1m, 1cm, 1km all these units are a unit quantity only no matter they differ in value with each other but they all have 1 unit which is m, cm, km respectively.

The unit of electric charge is coulomb so when we say a unit charge we are generally referring to the 1 Coulomb charge.

Well, the potential difference is not a huge complicated thing but many of you would have been confused if this has been introduced in the middle of electric potential and potential energy but it’s easy as it seems.

How is it possible that potential is the same at all the points? Well, this is the formula of electric potential for a single charge Q:

So electric potential ‘V’ will be constant and the same for all the points if the distance between the point and charge ‘r’ is constant.

So equipotential surfaces of a single point charge present at the centre are concentric spherical surfaces.

So electrostatics of conductor is about the situation and how conductors react with different electrostatics phenomena in different situations.
These are some points important to learn to have your basics cleared:
P.s: These are the points only important for your basics in-depth derivation and other important points and derivation is given in my handwritten personal notes provided at the end of the article. Do refer to those notes.

So all of us know what is conductor and insulator. Conductor are the material who can conduct electricity whereas insulators can’t because electrons (charge carriers) present inside insulator does not have enough space to move around. We all know about this.

But today we are not going to talk about dielectric strength instead we be talking about “dielectric”.

Dielectrics are non-conducting substances, in other words, you can also say that dielectric is just another name of the insulator. So this dielectric has no or negligible charge carrier present inside them, therefore, they can’t conduct.

In electrostatics of conductor one property which we have learned was whenever conductors are introduced in an external electric field, the free charge career present inside arranging them in such a manner that electric field due to induced (created due to moved charge carrier arrangement) charge opposes the external field within the conductor.

Well, this arrangement only happens until a static situation in which both external and induced electric fields cancel out each other and the net electrostatic field inside a conductor is zero.

What happens when a dielectric is introduced to an external electric field ?

Dielectric is of two types (i) Non-polar and (ii) Polar

Non-polar molecules: In this kind of molecules, positive and negative charges are present at the centre and they don’t have distance between them, therefore, they don’t have there own dipole. For example CO2, H2, and N2. 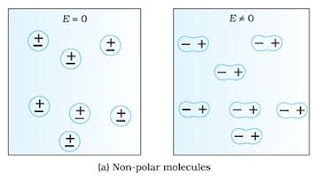 Polar molecules: In this, positive and negative charge are not present at the centre and have some distance, therefore they have dipole of their own. For example H2O. 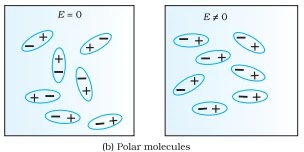 Well, this small-small dipole or molecules arrange themselves according to the electric field this is called polarisation.

A capacitor is the combination of two-conductor separated by an insulator. This conductor have their own charges Q1 and Q2 and due to this charge as we have discussed above they have electric potential V1 and V2 as well.

P.s: You all may be wondering how this conductor present in the capacitor is charge? Well, these conductors are charge by joining them with two terminals of a battery.

Charge on conductors are +Q and -Q but they cancel out each other in a capacitor and net electric charge of a capacitor is 0 which means that these both charges are an equal and opposite charge.

Due to this +Q and -Q  charges in the capacitor, the electric field also gets created between the region of these two conductors and this electric field ‘E’ depends directly on charge ‘Q’.

P.s: Here we are not talking about positive or negative charges we are just talking about the charge because both the conductor of the capacitor has an equal amount of opposite charges. More the number of charges more will be the electric field.

Well in a theoretical way, this potential difference is the work done in bringing unit charge from conductor 2 to 1 against the electric field present between them.

This means in a capacitor both electric field ‘E’ and potential ‘V’ directly depend on charge ‘Q’.

So because they both are proportional to each other the ratio of Q and V is a constant:

This constant of the ratio of Q/V is called capacitance (C) of the capacitor. Well seeing this formula you may conclude that capacitance (C) depends on Q and V but the case is little different here.

Capacitance ‘C’ does not depend on Q or V rather it depends on the geometry of capacitor such as shape, size and separation between a conductor in capacitors.

So what this capacitance actually is? As I told you at the beginning of this article that capacitance is the ability of an object to store electric charges and the definition is just the same but instead of an object it’s now capacitor.

To avoid confusion from the start I wrote “objects” instead of a capacitor.

So capacitance is the ability of a capacitor to store electric charge in it. Well after hearing this next question which might strike you will be where this electric charge actually gets stored in a capacitor? Whether on conductor 1 or conductor 2 about which we have talked about earlier.

Well, electric charge in a capacitor is not stored in capacitor 1 or 2 whereas it gets stored in an electric field present between the conductors.

What does the capacitance equation tell us ?

Well if capacitance depends on the geometry of the capacitor and not on charge ‘Q’ and potential ‘V’ then what does capacitance formula says?

Well, the simple meaning of this formula is a capacitor with high capacitance will able to hold more electric charges at relatively small potential ‘V’.

So a logical explanation to this is, high potential difference applies high electric field around the conductor and this strong electric field can ionize the surrounding result in acceleration of charge to produce oppositely field which will neutralize the charge on the capacitor and due to this reason more will be the potential, low will be the capacitance and ability of a capacitor to store electric charge.

We have talked about dielectric earlier which is basically insulator. This insulator or dielectric is present between the conductor of the capacitor and this dielectric thus have definite strength.

We know that dielectric material cannot conduct electricity but if we applied enough energy and electric field even this dielectric can start conducting electricity.

So the maximum energy or electric field a dielectric medium can withstand without the breakdown of its insulator property is called its dielectric strength.

The parallel plate capacitor consists of two large planes and parallel conductor plates which are separated by a small distance.

We know that the capacitor is the system of two-conductor with an insulator present between them so in parallel plate capacitor this insulator between two parallel conductors in a vacuum we will learn different cases where we will even discuss a scenario where we take dielectric instead of vacuum.

P.s:- These are my personal handwritten notes which I had made in my school years so do check them out they will surely help you and will save your time.

Don’t forget to book mark and subscribe this site because we will update all the subjects and chapter notes soon on this site with all the other interesting details.

10 thoughts on “Electric Potential and Capacitance with Handwritten Notes”