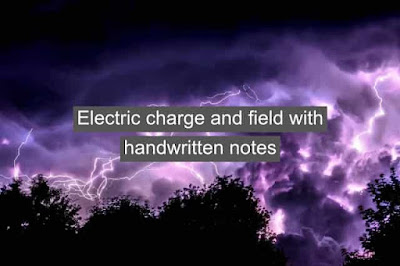 What is electric charge ?

So as I said earlier, electric charge defines the basic identification of different atomic entities such as electron proton and other sub-atomic particles as well.

One phrase which I heard often is like things repel each other and unlike things attract.

3 basic properties of electric charges are:
So now lets discuss about each of these charges

Well, the basic property is simple to understand. This property means that even if you remove an electron from a body or add an electron in a body, number of proton in universe is always going to be same to the number of electron present in universe and this is conservation of charges.

There are some point you need to understand:

2. The charges in pair can be destroyed and by this law of conservation of charges is maintained because number of proton is same as number of electron in the universe.

So what I have learnt in my research is that all the elements are basically divided into two categories in electrostatics on the basis of whether electricity can flow or not through them. So let’s find out about these elements:

So we all charge our smartphones everyday but do you know that which physics phenomena is actually working when you charge your phone? Lets find out!

Well for that we need to know what charging by induction means.

Suppose a body has some negative charge and when that charged body comes into a physical contact with another one the charges on both the body are distributed evenly on both of them. So if there are two bodies:

Body A and body B, body A is negatively charged and body B is neutral (means number of electron is equal to number of proton).

When both bodies come in contact total charge of both the bodies is now equally distributed and due to this negative charge on A is less than before and we see that body B is now not neutral and has some negative charge as well.

Here charge flows from body A to body B

Well this is what charging by induction means. Body which was neutral sometime back has now a negative charge.

So how is this related to your phone charging?

What is Coulomb’s Law ?

We learnt good amount of info about electric charge. So now let’s dig little deep into this and let’s introduce coulomb’s law of electrostatics.

So let me get you a basic idea what coulomb’s law is before digging more into it. Coulomb’s law helps us to find the force between two charges. Well sounds pretty unbelievable because charges are so small that we can’t even see them.

Then how can we find the force between the two?

Let’s solve this mystery by learning each step coulomb took before coming to a conclusion.

Well this law is pretty simple. If we put this law in simpler format then inverse square law says that more is the distance between two object less effect they will experience due to each other. Sounds legitimate ?

Well this law also says that more is the distance less is the effect but by how much distance exactly this effect will be reduced?

Well the answer to this is present in the heading as well. Effect or intensity will be reduced by the square of the distance between two objects.

So putting all these in one basket we can came to a conclusion that inverse square law stats that effect or intensity between two objects is decreased by the square of distance present between them.

But wait don’t get off track!! How will this inverse square law exactly helps us in finding force between the two charge? Well  think it’s pretty clear now that how coulomb found that.

So coulomb actually implemented this inverse square law to find the force between two electric charge. Coulomb states that force between two charges is varied inversely as the square of the distance between the charges and was directly proportional to the product of the magnitude of the two charges.

Well I know, I went little too technical so let me put it into simpler words. So above statement only means that force between two charges depend upon two factor:

1. Product of both the charges
2. Distance between them.

From inverse square law we know that intensity will reduce to the square of the distance between them.

So on the basis of above point coulombs derived these formula:

Well to remove the proportionality sign we need to introduce a constant here also known as coulombs constant.

So before removing proportionality lets understand about this coulombs constant once.

So first basic rule of physics is to remove proportionality sign in any formula and for that you need to introduce a constant in it. Therefore, Coulomb’s constant is introduced in the above formula.

But, why? So to find that we actually need to understand what is Coulomb’s constant.

Coulomb’s constant ‘C’ is equal to:

What does this formula denote? and how does above formula help us to denote the obstacle between the force?

Permittivity is a characteristic of a medium between two charges which affect the force between them.

So well from the definition of permittivity it’s clear that how the above formula denotes the obstacle and resistance between two charges.

So now when you know all these so now Coulomb’s law for force between the two charges is:

What is Electric field ?

Formula of electric field is:

So how exactly introducing a concept of electromagnetic proves electric field has physical significance?

So when source charge is in motion, change in effect will take some time to show on q2 as there is nothing which travels faster than the speed of light but what we notice is there is no delay.

The source charge in motion will create a field which will propagate at the speed of light and reach q2 and will show the force effect on it.

Well we have learnt about insulators before and one thing we learnt was insulators do not pass electricity because there is no space for electron to move.

What if we provide an electron so much power that it even if there is no space for it, it starts moving even a little bit? Sounds possible right?

Well it is possible to do that and if we provide electron with enough energy it will even start moving and then it will behave like conductor.

Dielectric strength of an insulator is the maximum electric field force it can withstand before breaking down and starts behaving like conductor.

So more is the dielectric strength better is the insulator.

Well these are the rules you need to have in mind before drawing electric field lines.

Electric flux is kinda different topic to understand. So well we all have water sinks in our kitchen. Well if you have closer look then you will notice that water flows through a hole connected to your house sewage.

So electric flux is nothing but intensity of electric field passing through an area.

Electric charge is an interesting phenomena and their are many allotments by which these charges can be helpful and one of them is electric dipole.

Well all these cool terms in physics such as dipole is interesting to learn on paper but what about in real and practical world?

Let me ask the same question like before! Does electric dipole have any physical significance or not?

Well let’s look into this as well.

Short answer to this is YES! electric dipole has physical significance but how? So let me explain.

In most of molecules you will see that the centre of positive and negative charge lies at the same place. Therefore dipole moment of these kind of molecules is zero

Wait can we do something through which charges which lie at the same place splits and dipole can be created?

Well YES! If these kind  of molecules are to introduce in electric field their centre splits and now negative and positive charges do not lie on same place and are apart.

So this way by putting these kind of molecules in electric field dipole moment can be created in them.

Some example of these kinds of molecules are CO2 and CH4 .

There are molecules as well where centre of negative and positive charges don’t coincide and these kind of molecules have permanent dipole moment even if electric field is removed. They are called polar molecules.

Molecules in which centre of negative and positive charges don’t coincide are called polar molecules. For example: H2O

Well yes this is the physical significance of electric dipole

So electric charge are of two types: positive and negative charge. These charges have some basic characteristic such has additivity, quantisation and conservation of charge.

To measure the force between two charges Coulomb gave us formula also known as Coulombs law of electrostatics. Coulomb derived this formula with the help of inverse square law.

Electric dipoles are nothing but when two equal and opposite are placed at certain distance and interesting part about dipole is total charge on dipole is zero but electric field produced by dipole is not zero.

Don’t forget to book mark and subscribe this site because we will update all the subjects and chapter notes soon on this site with all the other interesting details.

Q. Why electric field lines never cross each other?

Answer: No, electric field lines does not cross each other because if they do it will show two direction of force which is not possible.

Q. What is the direction of electric field lines?

Q. Does electric dipole also have the same direction like electric field lines? (+ve to -ve)

Answer: No, direction of electric pole is from -ve charge to +ve charge which is represented by line between both the charges.

Q. How physical significance of electric field is proved with the help of electromagnetism?

Answer: In electromagnetism you will see that field can radiate and propagate energy which signifies it has a physical quantity.

Q. How physical significance of electric dipole is defined?

10 thoughts on “Electric Charge and Field with Handwritten Notes”