Difference Between Primary and Secondary Succession 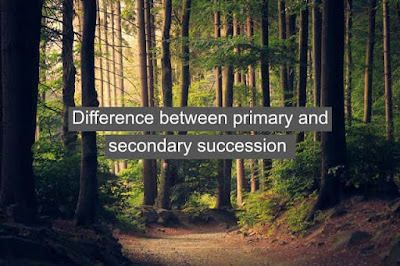 We all know that there is a constant change in the environment but what is this change called ? It is called ecological succession we will discussing about it ahead. Also we will see the two types of succession: primary and secondary. We will be discussing about the differences between these successions.

What is primary succession ?

Primary succession starts from where there had never existed any living organism. For eg, formation of new ponds, bare rocks, newly cooled lava, etc. This is very slow process and takes about 1000 years to complete.
The condition there is not favourable for living organisms to survive. There is also absence of soil which also means that there is absence of humus. Now you must be wondering, what is humus ? Humus is the organic component of soil which is formed by decomposition of leaves and other plant material by the help of microorganisms which are present in the soil.

What is secondary succession ?

Secondary succession is where there has been existence of living organisms in that place but was abandoned or deserted due to some natural calamity that took place. For eg, flood, tsunami, earthquakes, etc. This is a fast process and takes about 50-200 years to complete.
The condition is favourable for living organisms and there is presence of soil which means that there is presence of humus as well.