Difference Between Mendel’s First Law and Second Law of Inheritance 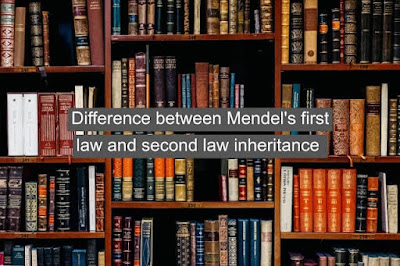 After finally being able to finally understand Mendel’s experiment and his techniques (if you didn’t you can read my article on Genetic Basis of Inheritance click here and this will redirect you to my article) when it comes to laws it is a headache to understand each and so much pain to remember it so to make it easy for you I have prepared a table of difference between Mendel’s first and second law of inheritance.

Here are 4 major differences you need to know between Mendel’ first and second law of inheritance:

What are the three laws of Mendel ?

After he conducted experiments on pea plant with the help of monohybrid and dihybrid cross, on basis of these crosses Mendel came to 3 laws which are as follows:

This is the second law of inheritance. Here the alleles which are in a pair stay together with mixing with each other. During gamete formation these allelic pairs separate or segregate and each gamete will receive one trait from of each pair of allele. This law is also known as law of purity of gametes. This happens in dihyrbids because in that experiment we are working with two traits so segregation takes place, but you can explain it with the help of dihybrid cross experiment.

This is known as the third law of inheritance and also the principle of independent assortment. This law or principle is based on dihybrid cross experiment. Here, the traits of both the parents are expressed simultaneously in the progeny as we have read about it above.

Mendel also performed trihybrid cross ratio but since it is not mentioned in your syllabus we won’t be going in detail. After he performed trihybrid cross he came to a conclusion that there is indeed random fusion taking place and each gamete will receive only one allele from each pair of traits and they are independent to go anywhere and enter into any gamete they want. They do not tend to carry their parental combinations and are totally independent hence this is known as the law of independent assortment.