Difference Between Karyokinesis and Cytokinesis 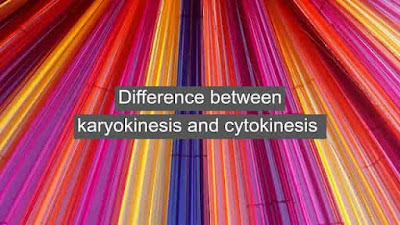 Just like breathing is important to us humans there are some processes which take place after fertilization which are important to create a new life on earth. These processes are important but sometimes we fail to understand the difference between them and the stages they go through.

Difference between karyokinesis and cytokinesis:

Mitosis is a part of the cell cycle which when replicated the chromosomes are separated forming two new daughter nuclei or cells. This is contains processes karyokinesis and cytokinesis. These two are individual process which form one process called mitosis.

Cell cycle also known as cell division is the process where cell leading to duplication takes place and it occurs in a series of events (Karyokinesis and Cytokinesis).

This is the very first stage that takes place in mitosis. Karyokinesis is division of the cell nucleus resulting in two daughter nuclei. This whole process occurs in 5 phases: Prophase, Prometaphase, Metaphase, Anaphase and Telophase.

This is the second process which starts after karyokinesis and you need to know that this is a whole another process from karyokinesis. Sometimes cytokinesis is not a part of the mitosis process and it makes a totally different process of itself results in formation of single cell but with multiple nuclei in it. Eg, in fungi, slime molds and coenocytic algae. Unlike karyokinesis, cytokinesis is a simple process with no phases involved.