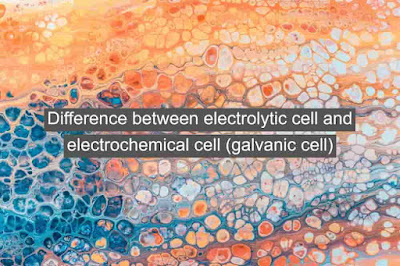 Both of these terms are like a tongue twister and can confuse you, so to avoid that confusion in this article I am going to differentiate between both of them and clear your basics so that you get a clear picture of both the concept.

Out of many differences, one of the main difference between an electrolytic cell and the galvanic cell is that:

Here is the difference table between electrolytic cell and electrochemical cell (galvanic cell) for your better understanding:

Refer to the images for better understanding

So this was the difference between an Electrolytic cell and Galvanic cell. Now to make it simple for you let’s have a look at some basics of Electrochemistry from where both these types of cells are originated.

Spontaneous reactions are those chemical reactions which occur by themselves we don’t need to do anything to carry out these reactions.

So in short electrochemistry has two-part to study:

1. Using a spontaneous chemical reaction to generate electricity
2. Using electricity to carry out non-spontaneous reactions that can’t occur by themselves.

Role of Electrolytic and Galvanic cell in Electrochemistry:

Now I guess it’s almost clear to you the role of an electrolytic and galvanic cell from the definition given above.

So if you take a close look into the difference table above, both these cells help us to achieve the objective of Electrochemistry.

On the other hand

Electrochemical cell or Galvanic cell is used to convert chemical energy into electrical by using spontaneous chemical reaction which can occur by themselves. For example, batteries in your television set at home are also an example of an Electrochemical cell.

Difference between rate law expression and law of mass action