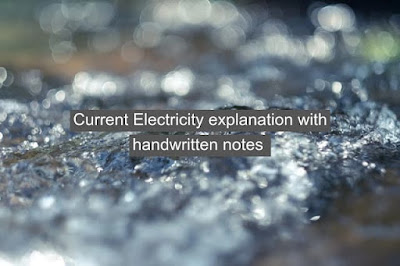 We all have heard the word “Current” and “Electricity” but ever wondered how this current is created? In electrostatics, as the word suggests we were considering all the electric charges in a static state means in rest but when these electric charges are in motion they create an electric current.

What is electric current ?

So the net electric charges ‘q’ flowing across an area in time interval ‘t’ would be:

So this is the current across the area in the forward direction.

P.s:- If this value is negative then ‘-‘ sign means that current is flowing in backward direction.

Ohm’s law is the basic law regarding the flow of current in a conductor. So what is ohm’s law and most importantly what is the use of ohm’s law?
Ohm’s law states that “In a conductor, potential difference (V) between the end of the conductor is directly proportional to the amount of current flowing in them.” which simply means that more is the potential difference between the end of conductor more will be the amount of current flowing through that conductor.

So we know that if an electric field is not present then electron present inside conductor moves in random direction due to thermal energy and collide with each other but once the electric field is applied these electrons start moving in the same direction creating a flow of current.

So one thing, which we need to take care of here is while moving with thermal when an electric field is applied all the electrons move in the same direction resulting in the current formation. While moving these free electrons experience drift in the direction of the force.

This drift velocity is responsible for “Current” formation because unlike thermal velocity it does not get cancelled out and all the free electrons move in the same direction. This drift velocity for a single electron is very small to the power of 10^-1 mm but still is able to create current and effective because the no. of electron carrying is very large.

So from the ohms law, we know that in a conductor electric potential (V) is directly proportional to the current (I). So in physics whenever this kind of situation arises where two terms are proportional to each other, simply introduce a constant to find the value of the two.

This constant has fixed vale for given temperature, pressure or any other general condition.

Same way, in this case, we will also introduce a constant between potential (V) and current (I).  This constant is called Resistance and is denoted by symbol ‘R’. So now this equation looks like this:

The S.I unit of resistance (R) is ohms denoted by symbol ‘Ω’.

So what is the conceptual meaning of resistance?

So the formula for resistance will be like this:

This article is a brief summary of chapter 3 current electricity for all the derivation related to this chapter and other important things I have prepared my special handwritten notes. These notes have all the derivation of this chapter including different devices such as a potentiometer, galvanometer, and meter bridge and Wheatstone bridge which are important topics for boards.

So do read these notes if you are a class 12th student and preparing for your board exam. This are easy to understand notes. To download them CLICK HERE.