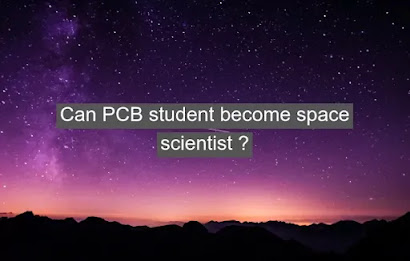 At least once in our life we all dreamt to become a scientist and wanted to explore more about this universe and world but after selecting Biology stream after class 10th many of us wonder whether we can still pursue this dream of becoming a scientist ? Because we all know that we can become a scientist after PCM what about PCB students? A short answer would be yes but the path can be a little different.
Yes, a PCB student can become a space scientist and get into the research field after specializing in a specific subject. Space research consists of many things such as astrophysics, astrobiologist and there are things to take care of to pursue a career as a space scientist successfully.

This article is about pursuing a career as a space scientist and what things you need to do to become one if you are a biology student and of PCB background instead of PCM.

The first one being, studying a particular subject and get specialized in it and the second one is to get into IIST and study engineering. As IIST is run by ISRO itself, they directly recruit students from IIST into space research.

Now the second option is not for you as in order to get into IIST you will have to give JEE mains and advance where maths is required as the subject in class 12th but this doesn’t mean you can’t get into space research as there is still one option left.

After completing class 12th with PCB background, you can either continue your study in biology for example BSc in Biology, and after that go for higher studies like MSc and Ph.D. in any particular subject to research in it. Don’t worry we will talk about this later in the article as well.

Apart from continuing your studies you still have Physics and Chemistry as your subjects where you can study further but if you are thinking to pursue your career in space research with physics then you will need to know maths at least till class 12th else in chemistry you only need a basic understanding of maths.

Now, not having maths can be a disadvantage but it’s not the end. You can still pursue your interest in research and become a space scientist.

You can pursue your career in astrobiology, astrochemistry, biotechnology, or even biomedical engineering.

Basic knowledge of maths is necessary but not having maths as a subject cannot stop you to pursue your interest in space or becoming a scientist.

As a scientist, you need to have good observation skills and after completing PhD you will be specialized in any one subject and field where you can research on your own and can become a researcher.

Getting into the research field can be tough in countries like India, as there is no specific pathway to get into it to become a scientist but with the growth of ISRO space research will be a rising career opportunity in the next few decades.

If you are interested in space and want to get into the research field with a PCB background, getting specialized in one particular subject is the best way to get into it especially if you are doing your Masters and Ph.D. from any of the reputed universities or I would recommend to complete it from abroad as this career is well known there compare to India.

Now there are some disadvantages of getting into space science in India as this not so well known career in India as of now, job opportunities are less and pay is also not much if you are just starting out.

So keep this in mind and if you are not sure whether you want to get into research only and want to know more about other career option available after PCB then here is the link of another article about high pay career options after class 12th PCB which you can read and select suited to you.